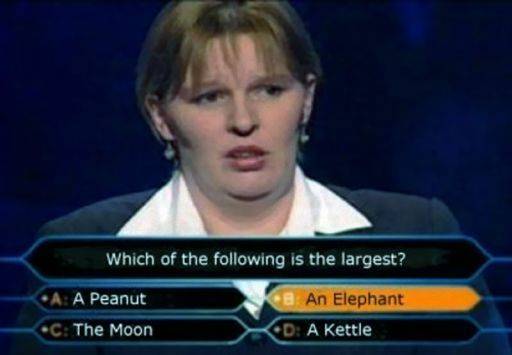 Who Wants To Be a Millionaire

I got the call yesterday that I have been chosen as a contestant on Who Wants to Be a Millionaire. Yes, I’m serious.  The taping is in mid-October.  I guess I should explain how I got here:

I was working in New York.  Actually I was there with our last Performance Art piece, the Only Watch we did with Sage Vaughn.  When I am lucky enough to get our new piece to show, I make as many appointments with various press outlets as I can, and then run around NY like a madman for a few days from one office to another showing and explaining the piece.  On this day, I happened to finish a bit early and decided to go for a nice walk in Central Park – the long way home to my hotel.

I exited the park North of my hotel and began to walk back down when I saw a line of people outside of a building.  Not one to walk past a line of strangers without asking why they are queued, they told me it was a tryout for Who Wants to be a Millionaire.

Now I have to tell you a bit about myself.  I know a pretty good amount of random stuff.  I’m not sure why.  I have a good memory, read a lot of news (now blogs), and used to watch a lot of television.  Back when Millionaire was really popular, 10 years ago, I desperately wanted to get on.  It seemed like I was guaranteed $250k or more.  It was just too easy!  Fate must have brought me to this casting.

I got in the line, deciding it was worth being late for my dinner appointment.  First there are hundreds of people in a cafeteria type room and you take a written test.  Out of those hundred, they called probably 15-20 of our numbers to stay and the rest were dismissed.  Then we were given a set of questions for longer written answers, more about ourselves and our personalities.  From that, 4-6 of us were chosen to give on-camera interviews with a producer.  At the end of my interview, my producer said something to the effect of, “I never say this, but you did great and you will definitely be on the show.”  I left pleased.  My completely random choice of streets had landed me a shot to win $1m on TV.  And then they forgot about me.

That was last July.  The network revival of Millionaire came and went.  A year came and went.  I had written the whole thing off as a fun experience.  I guessed that I didn’t quite play to middle America as well as they would want in a contestant.  And then, last night I got the call.

Of course, when reality sets in, expectations change.  Two days ago I was convinced I would win at least $250k.  Now I just hope to win the Fastest Finger, get in the Hot Seat, and not blow it on the first question.  I’ll post back on here as soon as I am allowed to let you all know how I do.  Although if you see me post about my new Opus 3, you can assume I did well 😉