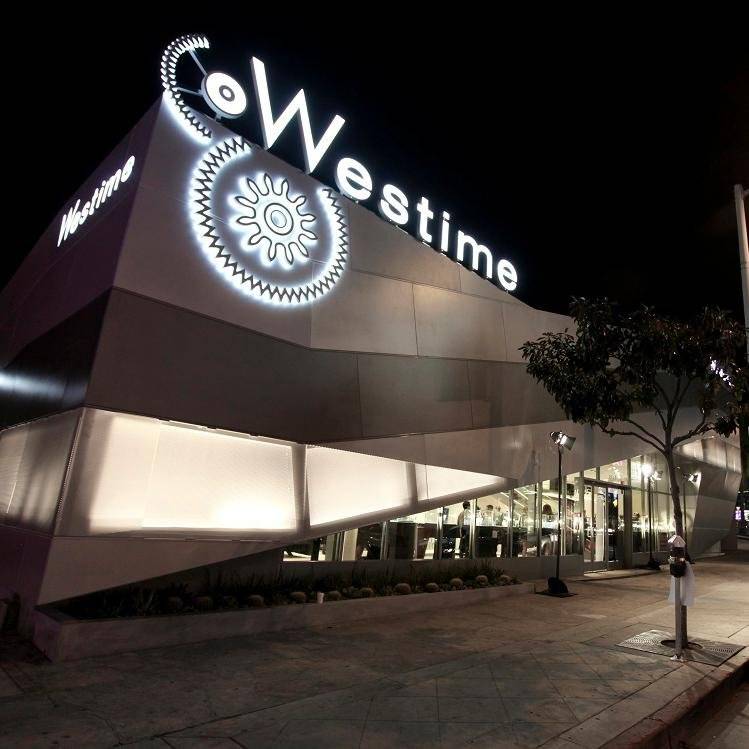 I thought I would take this week to profile my four North American MB&F Retailers: who they are, why we chose them, etc.  I’ll throw in a Tech Tuesday post tomorrow as well.
At MB&F, our retailers are our “Friends” as well.  We have the luxury of only working with stores that we enjoy working with and respect.  We deliberately keep our dealer network very small to ensure that each of our chosen retailers is able to provide the best service and best selection of our Machines as possible.

Where else to start but Westime.  With two stores in Los Angeles (Beverly Hills and West LA), Westime has become one of the top destinations for watch collectors in the world.  They carry AP and the top Swatch and Richemont brands, but their true niche is the smaller, independent companies.

To explain our history with Westime, we have to go back to the foundation of MB&F.  Max started the company with ~700,000 CHF – his entire savings.  Many watch brands start with ten times that amount and still do not succeed.  He honed his concept and created a plastic model of HM1, then took a trip around the world to meet with his top Harry Winston retailers.  Six of the best stores in the world agreed to take on the brand, relying on the goodwill Max had earned with them during his time at HW.  There was just one problem: that 700k was only half the money needed to deliver the first pieces.  Those six retailers agreed to pay a large percentage of their order up front, a year before delivery.  That is how MB&F was born and is why we do not have any investors or debt.  Westime was one of those original six “Foundation Retailers”.

At that time, the company was run by its founder, John Simonian.  John has since moved further out of the retail part of the business and is concentrating more on Richard Mille USA, URWERK USA, and their other distribution businesses.  His son, Greg Simonian, has taken over.  Although he is young, Greg is doing an incredible job.  He grew up in the store and has an innate understanding of the business.

This is a store that started on the second floor of a mall selling Casios and has worked over decades to become one of the top high-end watch stores in the world.  You have to respect stories like that.  Next year they will be moving their West LA store to an amazing new space in Sunset Plaza.  With an always great selection of MB&F’s as well as my other favorites like Richard Mille and URWERK, Westime is a must-visit if you ever find yourself in LA.