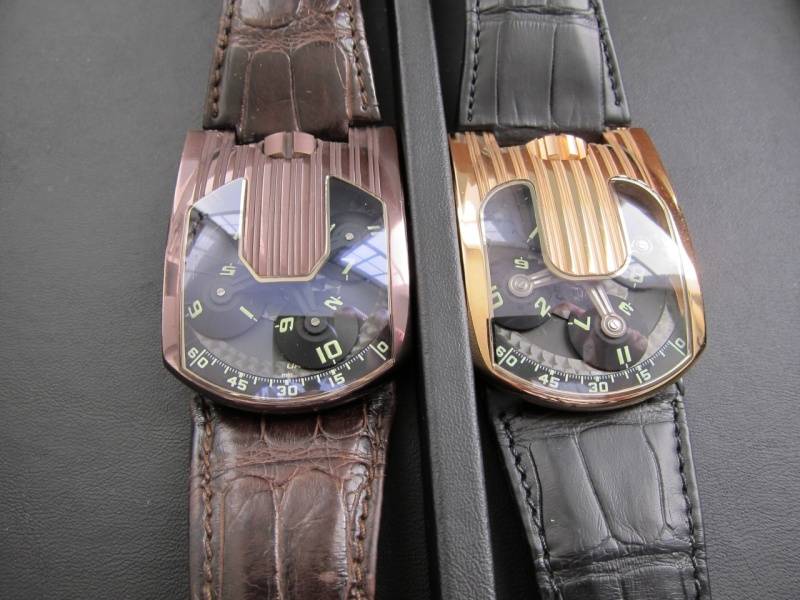 Where Richard Mille helped to subtly usher in a new world of horology, URWERK really founded what I now call Contemporary Horology.  From the advent of the quartz era until the late 1990’s, watchmakers had been focused on the past – slightly changing the same watches over and over again.  The 103 is a true landmark piece.  It represents a watchmaker and designer of an entirely new generation (my generation!) creating a piece of horology from their own point of view.  The sci-fi references, casual style and rethinking of the entire time-telling device is all decidedly post-quartz.  This is the moment where I believe we can start viewing watches as art pieces.
Like most good art, it did not catch on immediately.  Richard Mille had drawn on familiar characteristics of a watch to ease people into the modern world.  URWERK did away with all of that.  I recall an early 103 piece sitting in a lonely showcase seemingly forever.  Now collectors salivate over it.

Personally, I must admit that I did not fully “get it” until the 103.03, the first time the case was opened up to reveal more of the mechanism.  I bought one of the first pieces to come into the country – my first “super exotic”.  If Richard Mille is a Ferrari, now we are talking about a Pagani Zonda.  The watch really felt like it was of my generation – I was proud to wear it.

As an aside, my wife, who is much smarter and infinitely more stylish than I am “got it” immediately.  When she had the opportunity to buy herself a really nice watch, she picked a rose gold 103.09, shown below in a his and hers shot. So when it comes to collecting and historical relevance, I like to look at who is doing something the best.  To me, URWERK and MB&F are best representing Contemporary Horology.  They both recognize that the mechanical watch has been freed of its practical necessities and can, instead, be used as a sculpture.  While I love mostly everything that URWERK does, the 103 series represents an important point in my life and collecting history, and therefore is still my favorite.  No collection of 21st century horology is complete without one.

Tomorrow, for my last Collecting History post, I’ll take a look at the logical conclusion and my favorite watch I have ever owned, the MB&F HM4.