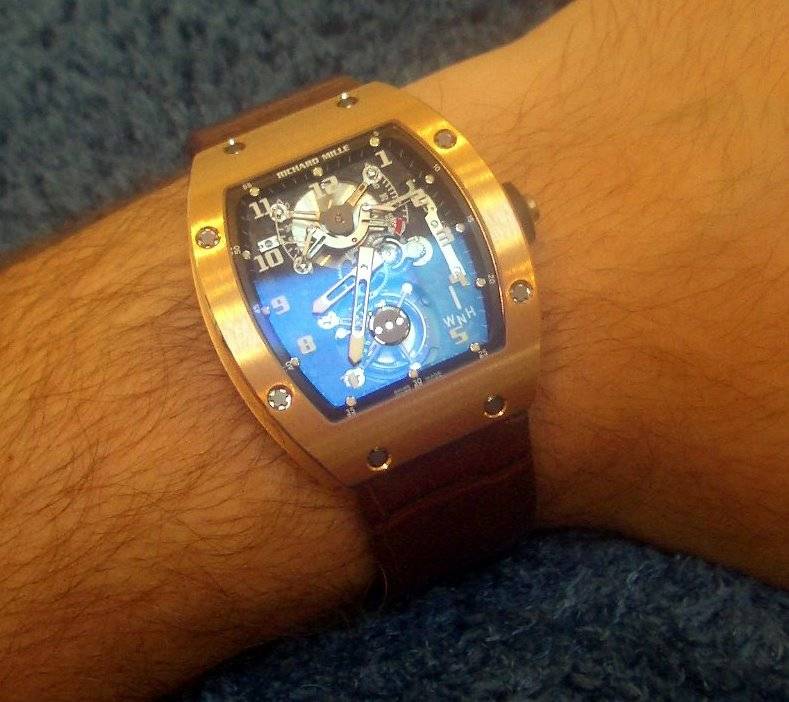 The Richard Mille RM002 is the watch that got me hooked on “exotic” watches.  In the early 2000’s, like most other people, I had no idea that $100,000+ watches existed.  The idea was simply absurd.  Why would anyone spend that much on a watch?  How could it possibly be worth it?
Sure I had seen some watches that I considered incredibly expensive.  I recall seeing a Patek perpetual calendar chronograph (3970) which at the time, I believe, was about $40,000.  A watch exists that is 4 times that price?  Unimaginable.

I vividly remember seeing the watch for the first time.  A friend had just bought it, and I asked to see it out of sheer amazement at the price.  Of course it looked cool, but still I did not fully understand.

And then I put it on my wrist.

Really, it all changed for me right then.  The watch was SO comfortable – both ergonomically, and psychologically.  It wasn’t ostentatious, or old and stuffy.  It was me.  I could see myself wearing it every day.  And so I decided right then, that some day I would buy one.  A year later I saved up enough to write the check, and I wore that watch nearly every day for the next 18 months.

So that is my very personal story with this watch, but why does it mean the watch is historically important?  Richard Mille was able to influence an entire market of people just like me.

He blew the lid off pricing, somehow making people comfortable paying many times what they had ever paid for a watch.  You may think this is a negative for consumers, but actually it has been perhaps the single biggest driving force towards all of the incredible watches we see now.  If no one was comfortable paying $188,000 for a watch, something like an MB&F HM4 could never exist.  There is simply no way to make some of these amazing sculptures with pre-Richard Mille pricing.

I’ve also heard Richard Mille being described as a “gateway drug”.  It is an exotic watch that Patek and Vacheron guys still often feel comfortable wearing.  In a pre-exotic world, it was a great first step to getting people used to the crazier things to come.

And so, just as this watch started my fascination with Contemporary Horology, in many ways it paved the way for much of what was to come.  No discussion of this period of watchmaking would be complete without Richard Mille.

Tomorrow I will take a look at another pioneer in the history of Contemporary Horology, and a very important stop in my collecting history, FP Journe.